I recieved an email from another reader of the site, Barbara McCormack,
who had ran across the site
while trying to find information on a sign she has had for some years:

I am hoping someone is around to help me with some unanswered questions.
I found a website that has some info on some steamboats that were on WDW
property and I belive that I have been in the posession of a sign that was
on the boat that is listed below. I would like to send a picture but
want to make sure that I am in contact with someone that is interested
in the riverboat info. This sign is very large and extremely heavy.
I have had it for over 10 years and came across it at an auction.

The Admiral Joe Fowler Riverboat from Frontierland was scrapped in 1984
along with the "Ports of Call". As for what happened to the materials
from it, I don't know. [editors note. I had asked him if he knew if any
of the materials form it had been saved for use on other ships or for
later use, like in the steamer at Tokyo DL. ] 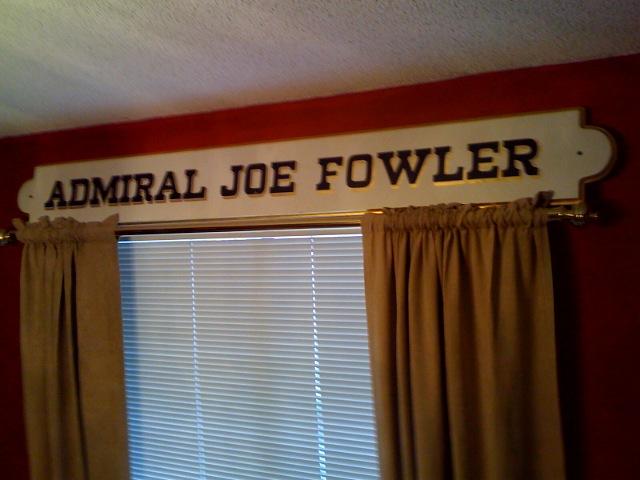 ...the italisized quote there at the end is from my site
at the following link:


First off though, for anyone who is thinking "Huh I rode the Admiral Joe Fowler across
the Seven Seas Lagoon not too long ago" I'll mention here that is NOT the
Admiral Joe Fowler is not the ship we are refering to here, this
Admiral Joe Fowler was the FIRST steamship in the Rivera of America
in the Liberty Square/Frontierland area of the Magic Kingdom, and it looked a
lot more like a clone of Disneylands Mark Twain than the current ship does.


Also note that the part she quoted from my site ties in nicely with
the information from Captain Jim as it mentions the two ships were scrapped
at the same time, so most likely the sign from the Fowler entered public hands
(or at least cast member hands) around the same time that Jim got his
ventilators from the Ports O' Call. Though it appears that Barbara purchased it from
a later auction in the mid ninties. I've also heard that some of the nautical
artifacts at Typhoon Lagoon are leftover from retired ships of WDW's navy,
including a sort of plaque off one of the ships somewhere near the gift
shop I think. I need to get over there and take some photos one of these trips.