The Trip without a Camera...but NOT without photos Part 2


Epcot's 25th Anniversary Celebration or Celebration 25 bears another nickname for me "The trip without a camera", and this is just the second in what I hope will be a series of posts with memories from this trip shared by others who let me use their Celebration 25 photos here with a special focus on those photos that have me in them.

here's a link to the previous post in this series
http://bigbrian-nc.livejournal.com/11645.html 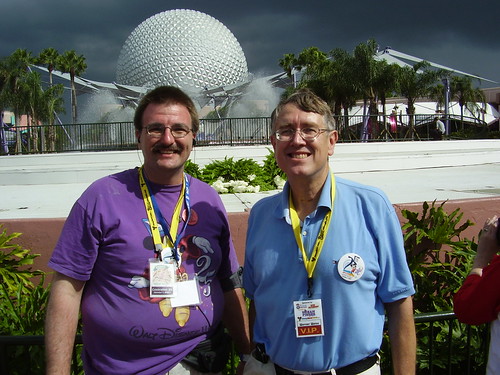 While we were gathering and waiting to take the BIG group photo I got to talking to a few of the Disney fans nearby one of them took this photo and let me use it (thank you Brad Lewis!), as we talked I noted that the name tag on this fellow in the blue shirt said Werner, so I had to ask "Are you Werner Weiss of the Yesterland web site" or words to that effect he was and so I told him how much I liked his site complete with the whole "you're the reason I bought a computer" thing, as his site has always been the one I considered my "favorite". I would still claim that, though in the early days of the internet he really went a LONG time without having any real competition in providing fantastic Vintage Disneyland content, even now his site is so well put together with very consistent well themed and formatted pages (right down to the text fonts) and so not to be missed if you do like vintage Disney parks content.