A fitting trbute: part one of three General Joe Potter

In 1999 in a sort of preparation for the then upcoming 30th anniversary of WDW in 2001 it was decided that it would be fitting to re-christen Walt Disney Worlds fleet of three Ferries, The Blue-Paneled Kingdom Queen, would be re-named the
General Joe Potter, the Green-paneled Magic Kingdom would honor
Admiral Joe Fowler, and the Red-paneled Magic Kingdom II would be
given the title of Richard F Irvine. This series of articles will talk a little about each of the Disney Ledgends these ships are named for. 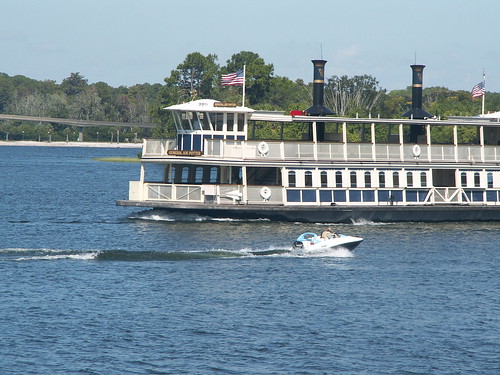 WDW's navy is one of my favorite subjects to photograph,
and the renaming of the ferry fleet in 1999 in honor of some of the people
responsible for getting Walt Disney World built is something I think was
a particularly good idea!

The ferry pictured above is now known as the General Joe Potter
it was known until 1999 as
The Kingdom Queen.

General Potter had a long career
with the US Army Corps of Engineers and so when the job of re-shaping
the Florida Swamp land into something suitable for the construction of
a resort destination began he was a natural for such a big job, he had
worked overseeing the construction of Dams, levees, airstrips, power
stations his whole career. His last assignment with the corps of Engineers
had been as governor of the Panama Canal Zone, during what proved to be a
particularly turbulent period, when that assignment ended in 1960 he didn't
feel that an appropriate assignment was made available to him (possible
because of the problems he had faced in Panama) and he left the COE, in a
way that was quite lucky for us, because just at that time Robert Moses was
looking for an executive Vice president to help with the construction of the
New York Worlds Fair that was to begin in 1964 in flushing meadows, Queens,
New York, if not for taking that job he likely would not have began his
association with Walt Disney, who got to know the General through the four
projects Disney was producing for various sponsors at that fair. In 1965
Walt hired Potter away from the fair to help with "The Florida
project" General Potter retired from Walt Disney Productions in
1973 when he founded a consulting business with long time Disney manager
and construction boss Admiral Joe Fowler.