In part two of this series we talked a bit about Admiral Joe Fowler,
including the fact that both he and Richard F Irvive at one time had
steamships on the Rivers of America in the Magic Kingdom the park named for
them, but with the retirement of the damaged Fowler and the re-christening
of the Richard F Irvine as the Liberty Belle that by
the mid 1990s there were no ships named for any of the Disney ledgends...
untill 1999 that is.

In 1999 in a sort of preparation for the then upcoming 30th anniversary of
WDW in 2001 it was decided that it would be fitting to re-christen Walt Disney
Worlds fleet of three Ferries, The Blue-Paneled Kingdom Queen, would be re-named the
General Joe Potter, the Green-paneled Magic Kingdom would honor
Admiral Joe Fowler, and the Red-paneled Magic Kingdom II would be
given the title of Richard F Irvine. This series of articles will talk
a little about each of the Disney Legends these ships are named for. 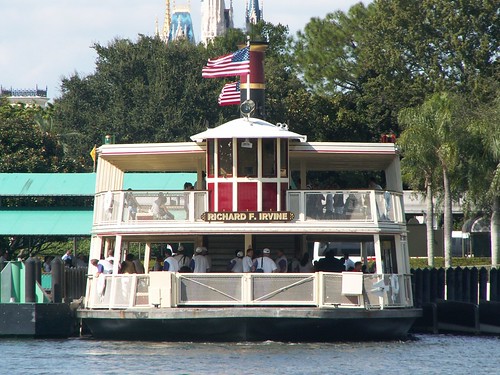 Christened as the Richard F. Irvine, this
ship originally known as The Magic Kingdom II has red panels. 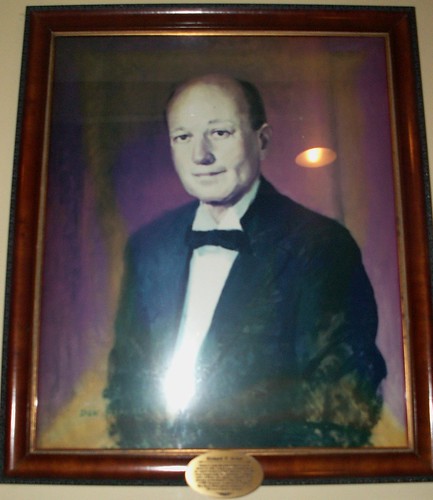 There is now a portrait of each of these men on their ferries, and near
the bottom of each is a small plaque, the plaque on Irvine's portrait reads as follows:


Richard F. Irvine first joined Disney as an art director in 1943.
A decade later, he became one of the original members of WED Enterprises (now Walt
Disney Imagineering), the organization of designers, artists, architects, and
engineers responsible for the planning and development of Disneyland. As head
of WED Enterprises, he directed the design of Walt Disney World until his
retirement in 1973. this boat is named in his honor.


from his Disney legends page:

Senior vice president of Walt Disney Imagineering John Hench recalled,
"Because Dick had worked with movie set designs, creating structures and
settings, he understood our needs more than standard architects, such as
"forced" perspective, making things smaller to give the illusion
of being farther away and other optical values."...

Dick was convinced that the motion-picture artists, art directors and
technicians, with their imaginative know-how and theatrical experience,
could produce an outstanding theme park. ...

Until his retirement in 1973, Dick headed design and planning for all
Disneyland attractions, ranging from the Haunted Mansion to Pirates of the
Caribbean. He also guided creation of attractions featured at the 1964-65
New York World's Fair, including It's A Small World. Dick went on to help
shape the master plan and attractions at Walt Disney World and in 1967, was
appointed executive vice president and chief operations officer of WED
Enterprises (Walt Disney Imagineering).

It has often been noted that the scenes in Disney theme parks open in front
of you as you walk like shots in a movie, among the other things
he did it should be noted that Dick Irvine would be one
of the people who helped make it that way.