I've held off on joining the blog community for some time but, as time goes on, I've begun to realize the ease and utility of use for some things that I've had trouble sharing in a practical way before now. Sometimes I'll get caught up in looking up information on a particular Disney subject and I'll want to share that somewhere, many times this information will end up on a forum somewhere later I may want to look it up, which can be difficult if I don't remember whee I posted it, this way when I'm doing a long involved post with lot's of links or pictures I can post it here and simply post a link to the article here with a brief description in the various forums it may be relevant to. Another thing this will be useful for is sharing information learned from interesting email I oftentimes get BECAUSE of my web site, videos (you tube and google), Photos on my site and Flickr, my podcast, and WDW: A History in Postcards. I even may write on a topic that is triggered by someone else's podcast I have listened to. 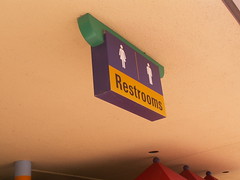 For instance I've really enjoyed the past couple episodes of The Adventures of A Teenage Disney Geek in which he has had a long discussion with both of his parents (both of whom are a hoot by the Way) about BATHROOMS in the Magic Kingdom and Epcot theme parks. Now it helps that this is a subject I've had an interest in for a while having MANY pictures of Walt Disney World bathrooms on my site and more recently on Flickr where I have even developed a unique tag to help find my bathrooms pictures on Flickr TOTVKOTW which is short for Thrones Of The Vacation Kingdom Of The World. I also joined a Flickr group dedicated to WDW bathrooms. I had been a bit hesitant to plunge in headlong into writing about this anywhere previously in part because my WDW bathroom photos are split between those hosted directly on my own site and those on Flickr. As just a sampling of the photos here's a bit of what I wrote over on the DPN in the thread dedicated to Kegans (The teenage Disney geek's) bathroom shows.

I have pictures of MANY of the bathrooms you talked about if you go over to Flickr and type the term TOTVKOTW you will see MANY of them,
TOTVKOTW is a tag I have added to ALL of my bathroom pictures of WDW on Flickr and it is short for "Thrones Of The Vacation Kingdom Of The World" . Still here are links to a few of the favorites that you mentioned. 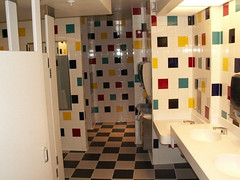 outside international gateway AND Boardwalk Hotel

Because of the way Disney designs their larger restrooms in the parks without doors, sometimes you can see the tile work in the bathroom from the outside the "standard color"in many of the OLDER restrooms for men seems to be BROWN like the SOUTH restroom at the TTC (there are actually TWO sets of Restrooms at the TTC.

In older Women's rooms I suspect the default color may be blue as you can see blue tiles in from the entry of some of the Women's rooms in places where the adjoining men's room has Brown tile, but I never took any photos to illustrate this point, but I think I found a picture, on someone else's Flickr account, that shows the Womens room by City hall and it's BLUE tile.

Since I mentioned the TTC south bathroom which appears to be one of the oldest ones her's a MAJOR contrast just a hundred yards away is the TTC North bathroom it's a much more attractive facility.

The Bathroom on Tom Sawyers Island is the bathroom where I am MOST glad that the interior does not match the exterior theming! (as it would be more like an outhouse then) pictures are about 3/4 of the way down the page:

Before you leave this post shouldn't you wash your hands? 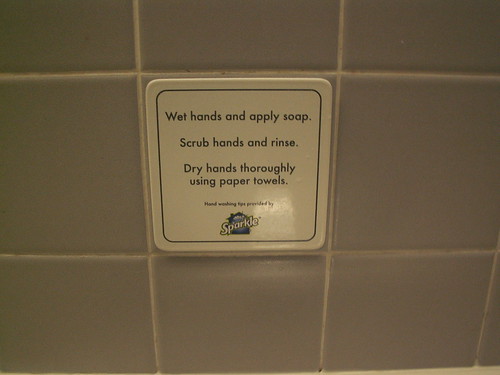