Most of you are aware that there are at least two companies now that
specialize in reselling old Disney stuff from warehouses in the central
Florida area, I believe they both have a presence on Ebay as well. They take
old resort furniture linens drapes, and things removed from Disney Attractions
in the process of refurbrishment, replacement or demolition, and offer it up
for sale. But what did Disney do with this stuff before they had these
companies willing to do the labor to remove this stuff and get it out of
the way, well in large part I imagine they used their own employees to haul
the stuff off to be disposed of or donated, but in some cases some of the
items were so nifty they realize SOMEONE just MIGHT want to buy it, only
back in that day and age there was no internet to advertise this stuff to
the Disney fans, so who did they sell it to? Well it just so happens that
the largest concentration of fans of the Walt Disney World resort in central
Florida actually WORK at WDW (I don't have any statistics to back that up
but it sure seems likely). Case in point Jim Beakman, he wrote to me because
of my pages on the water craft of Bay Lake and the Seven Seas Lagoon

as a former Craftie,
it was a pleasure to be taken back in time to look at the boats again!
Before I forget, I can tell you that portions of the 'Ports' were indeed
sold at the company property control sale after it was dismantle (they
actually drove a bulldozer through the hull----I damn near cried!).
But I was fortunate enough to score 2 solid brass 'ventilators'
(picture of one attached). Both were located on the main deck, one near
the bow, one near the stern. I recall paying $5 each for the ventilators
and the teak boxes they were sitting on. These boxes/ventilators now house
my home stereo speakers! 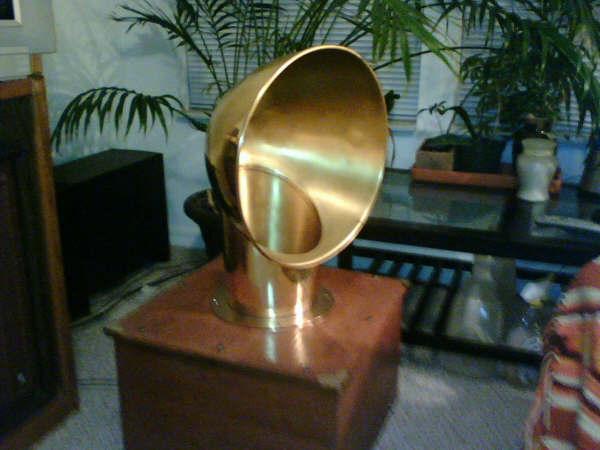 Jim told me a little about himself in that email and invited questions,
so I followed up with some and the email below was his reply.


I started working in Watercraft in the fall of 1976 and was initially
trained on Ferry boats. I have to amend my original statement (below). The
Queen WAS there when I started, but there were steering differences in the
MK I & II at the time. The steering on the Ferryboats as you may or may
not know is now essentially a lever that provides a angular representation
as to where you want the rudder angle to be. Back in '76, it was hydraulic
steering. It appeared to be the same arrangement, but you had to 'open'
and 'close' the hydraulics operating the rudder with the tiller. If you
were to have (for example) absent-mindedly left the stern tiller just a
hair to the port when underway across the Seven Seas Lagoon, the hydraulics
would slowly bleed so that the ship would steer HARD to port, and you
would have to counter-steer to starboard to correct.....something that
didn't immediately happen, of course.

After a year of so, and much cajoling, I was trained on launches
and cruisers. My trainer was a gentleman by the name of Craig Tafoya.
There was, I believe, only one Natural Gas launch at that time, I think it
was the Mariner. Several of the launches had dual controls (one for throttle
and one for forward/reverse) rather than the current single control.
During my training on launches, we took a moment to walk on the
(by then) de-commissioned Chinese Junk. Rumor has it that 80's
NY Jets Quarterback Joe Namath purchased the Chinese Junk sometime later.
A couple of years ago I read Craig was a yacht Captain on the worlds
largest privately-owned yacht. Now THAT'S a life! I Googled Craig Tafoya,
and came up with the following article:

Regarding the Cruisers, by the time I left, there was still only the "Bonnie"
and the Castaways. The Mermaid was not even a rumor at that point.
But have you heard about the story of the "Ghost of the Bonnie"? Story was,
during the building of the hull of the Bonnie, a welder was in the stern
section, welding components for the rudder controls, when fumes exploded
when he lit his welding torch. Ever since then unexplained "things" have
happened on this boat. If researching this, I understand the names of the
Castaways and Bonnie have exchanged the hulls of the Cruisers at least once.
One time, I was on the final run on the Bonnie from the Contemporary to the
Campground, just before midnight. It was a scene straight out of a horror
movie: fog on the water, full moon, still water......really eerie.
My deck hand and I were commenting on just HOW eerie, and upon realizing
that we were on the Bonnie, one of us (me?) said sarcastically: "Ooooh, and
we're on the Bonnie! Beware the Ghost of the Bonnie"! A split second later,
the windshield wipers came on by themselves! I promise you that neither of us
said anything after that until the boat was tied up in Drydock that evening

I'm not sure of the year I trained on the Ports, but I know the Seas was not
there at the time (I DID however walk between the hull sections of the new Seas
while under construction in Dry Dock). The Ports was by far my favorite boat.
The one moment I will take to my grave is that of a beautiful, balmy,
moon-light evening when I was piloting the 'Moonlight Cruise'
(a.k.a.: 'Booze Cruise'). The deckhand and engineer were 'cheating' by
gabbing with me in the pilothouse instead of being in their assigned spots.
The bartender and waitress (she's another story!) kept us in non-alcoholic
drinks throughout the evening. Benny Goodman, Glenn Miller and other '40's
Big Band music playing in the background, the gentle thrust from each stroke
of the steam engine, and the lights of the Magic Kingdom reflecting off the
Seven Seas Lagoon.....it was just a perfect nite. The mood was just so nice,
so mellow, I couldn't help but say out loud to my co-workers/friends:
'Ya know, this just does not suck!'. I know, hardly eloquent, but we were
at work, and this was said while acknowledging that we WERE at work.....
and that rarely happens!

It's been one of my disappointments that I have not kept in touch with my
former friends from Watercraft. I'm not sure what contacts you have from
my co-workers, but if you REALLY wanted to get some stories about 'the good
old days', you should get a bunch of us together for 'war stories'. It is
unavoidable if we were to meet up. Some of it "unDisney" in nature: Mooning
each other on Lightshow, riding the walking beam on the Ports and Seas
(picture the rocking horse in front of Wal-Mart), driving AND DOCKING the
cruisers using only our feet (been there, done that), wet towel fights,
speil "enhancements", and countless other stories would abound.

Also, at the same time I found your website, I also found a
website from a former co-worker, Greg Chin. I think you may
find this enlightening:
http://www.wcdept478.com Lots of very good pictures of the Ports,
other watercraft, some of my co-workers, etc.

Anyway, I have attached another picture of my ventilator.
Please let me know if you have any further questions.