In the previous part of this article I mentioned the "nickname" system of the Adventurers club that helps fans of the place distinguish between different actors who play the same roles on different nights. I also mentioned that I used that data (nicknames) to help label the photos I have on flickr. In looking up those "faces" to match to the nicknames I came across a few faces that were familiar from places on property OTHER than the Adventures club, this post will talk about one of those.


I saw a listing for a  portrayer of Otis T. Wren whose nickname is Ole Stogie
http://advclub.wikia.com/wiki/Ole_Stogie%2A
I thought right away "Is that who I think it is" and wrote a letter along those lines to the AC yahoo group as follows:
if it is who I think it is? If so he has played a WIDE variety of
roles over the years at the Magic Kingdom...
For many years he was the Diamond Horseshoe revues Medicine
salesman/emcee Dr. Bill (that's right Dr Bill Ya later [insert rim shot]
after that show closed he went through a succession of roles:
He was a Dapper Dan (though the few pictures I have seen of him in that
role seem like a comic relief sort of Dan)
He was Main Street USA Councilman
He was one of the first "Macs" in the "pirate tutorial" and even
appeared as that in the video for the "dream job" contest back in 07.
He also appears as a pirate with his band Rusty Cutlass that appears in
the Magic kingdoms Pirate and Princess Parties as well as the Mickey's
Very Merry Christmas parties. I even have their CD bought through their
web site at http://www.rustycutlass.net
and he is also the Fire Chief on Main
Street USA appearing in (among other things) the big song and dance set
the citizens do when the Mayor announces for re-election Audio from that
set and an example of the stuff he used to do at the Horseshoe is on
episode 28 of my podcast
http://www.bigbrian-nc.com/sn28.htm
He also appeared in a Halloween
special I posted featuring some other Horseshoe related audio
http://www.bigbrian-nc.com/sn2006-07.htm

I have pictures of him in a few of these roles, as Fire Chief Miller 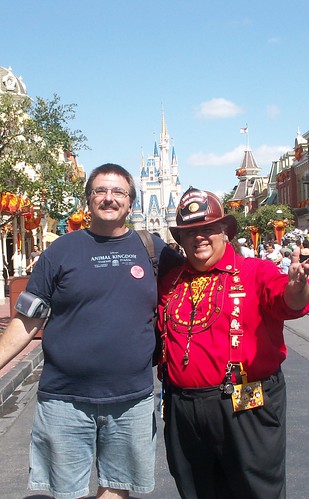 there are several photos of him in Oct. 2002 at the Horseshoe on this page:
http://www.bigbrian-nc.com/moon/b7.htm

and hers a picture of him from WAAAAAAY back in 2000: 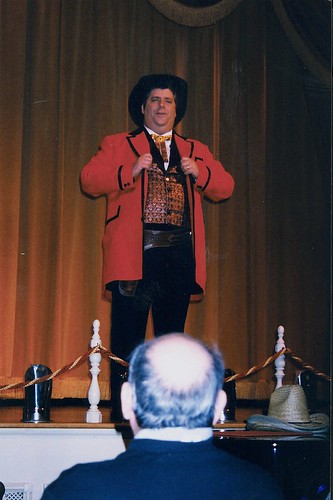 To close out here he is just last December, providing accompaniment (on his whistle ) as the Toontown Tuners load up with the mayor for the short trip over to city hall where the mayor is about to announce that he is running for re-election 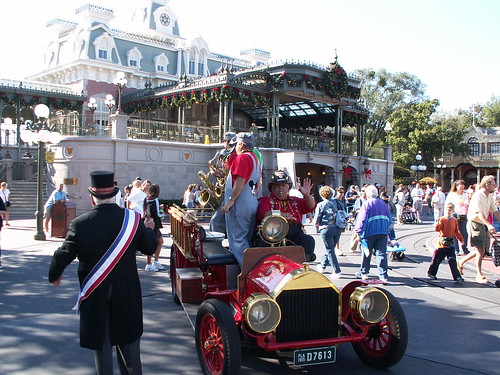