distinguish between different actors who play the same roles on different nights. I also mentioned that I used that data (nicknames) to help label the photos I have on flickr

. In PART II I mentioned that in looking up those "faces" to match to the nicknames I came across a few faces that were familiar from places on property OTHER than the Adventures club and talked about one of those the guy who played Otis and was nicknamed ole stogie who is a regular at the Magic Kingdom.
http://bigbrian-nc.livejournal.com/4340.html

Another cast member in the AC that appeared to me to be a Magic Kingdom Regular has the nickname of Leprechaun on the wiki:
http://advclub.wikia.com/wiki/Leprechaun%2A

much like the entry for ole stogie I mentioned in the previous post the
listing for leprechaun too seems to be a bit sparse in detail, though
he too looks familiar, and if I am correct he shares more in common
with "Old Stogie" than that, as he too is a member of Rusty Cutlass
http://www.rustycutlass.net
and he is also a long time Dapper Dan, usually appearing in PURPLE
stripes. He is also probably the shortest of the Dapper Dans, and as such he is the recipiant of many short jokes when they are hamming it up, which would seem to tie in nicely with his Adventurers Club nickname as well, in fact it reminds me of a line I've seen Otis use on Emil Bleehall when he gets frustrated with him during the Balderdash cup competition... "get out of here you freaky little leprechaun", and since that is one of the roles he has played in makes a certain amount of sense that way as well. 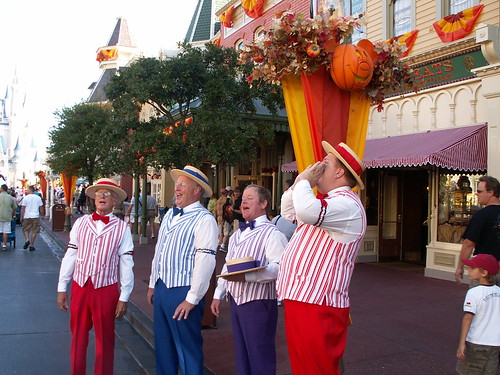 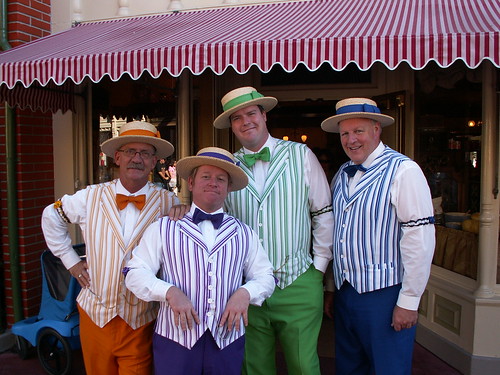 here's a cute one of him doing a song and Dance bit with the
"assistant to the Mayor" citizen of Main Street Character while the
Toontown Tuners perform in the background:

and here he is as a "Cadaver Dan" at a Mickeys Not so Scary Halloween
Party: 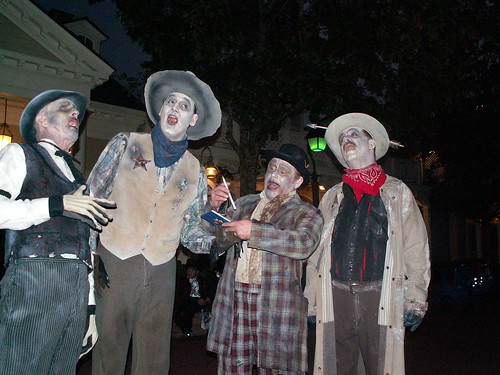