I am pretty good with directions. Generally, if I drive or even ride somewhere just once I can always find my way back, and living in a relatively large city where there is a good bit of traffic I like to know good "side roads" to bypass traffic troubles, so a lot of times if I'm not in a hurry I'll deliberately try to take a different route to see if it has good potential as a way to get around a traffic problem. I used to live on the east side of Charlotte and took pride in knowing all kinds of shortcuts, and work-arounds, but, a few years ago I moved to a different part of town (the place I live now in south Charlotte), I started checking out a lot of the side roads on this part of town, one day I was checking out a part of Old Pineville Road I had never been on before, Old Pineville Road is only two lanes but it runs parallel to South Boulevard, a pretty good road one that suffers from a good number of accidents, so knowing Old Pinevilles path could come in handy,

so at Archdale road I headed south on Old Pineville Rd. towards Arrowood road at first it looked a lot like other parts of the road i had been down, then I came to several buildings that made up the campus of a large church, then I drove past a large parking lot across which sat the Wonders of Life pavilion from Epcot...ummmm either I just found the BEST SHORTCUT TO WALT DISNEY WORLD EVER, or perhaps, that wasn't the wonders of life pavilion after all, so later I had to come back again this time with my camera. 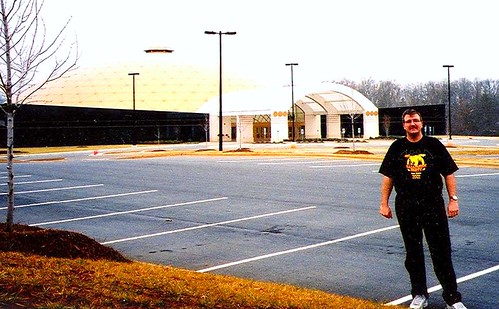 It turns out that this building is a part of that aforementioned large church campus, known as Victory Christian Center
and a small picture of it even appears on one of the pages of their web site:

I'm guessing that the Wonders of Life building at Epcot might have been based on an "off the shelf" design, or that once it had been done in Epcot it didn't take long for some architects to realize its potential elsewhere after all it you think about the WOL pavilion that large open central area would be ideal for a church would it not?


So while I still don't have a path that let me drive to Walt Disney World in 10 minutes, at least on those occasions when I do drive down that road I get to see a little reminder of Epcot right here in North Carolina.