Earlier in the week I used a blog post to echo the announcement of a new episode of my podcast, as a simple copy of the shownotes to the blog. I'm undecided as to if that is a good idea or not, and since for the next episode (releasing today) I have some other material that is somewhat related from a few recent posts I've made in another forum (specifically the picture a day thread on http://www.DisneyWorldtrivia.com) I've decided to use that here, though there are actually links to two episodes in this post, so be aware that the link to the new episode is down below the picture of the guy on the piano (LEON).

I listened to the most recent episode of WDW Radio yesterday and heard the bad news about the FURTHER entertainment cuts, and while I'm a bit sad about them I'm still hopeful for the future, but just for anyone who has not heard about all the cuts in addition to the elimination of the Family Fun Day Parade, Woody's Cowboy Camp, Four for a Dollar, Pocahontas and her forest friends, Lou Mentioned these additional cutbacks, at Disney's Animal Kingdom;In Epcot:It's always a bit sad to see these down times, let us all hope the economy turns around quickly and they can return to a period of growth in entertainment soon!

I remember back in 2001 when they cut all the early entry and went to having character cavalcades at the resorts, then by the time I visited in October 2002 things had started to turn around, the park was back to opening earlier, and they had added things at the Magic Kingdom like the morning opening ceremony, and the trolley parade, (that may have also been around the time they began to add Main Street Streetmosphere characters, but it wasn't on my radar if they did) here's hoping that when this downturn they are bracing for now, comes to an end that once again they will make those sort of improvements.

Of the groups and shows that are leaving I will probably miss Spelmanns Gledje the most, I used thier audio on an episode of my podcast.
Mousin' it Up! °O° Season 2008 °O° Episode 34- Norwegian Constitution Day

and this specific page:

that was the first of two post related to recent cutbacks here's the second:

good news / bad news
In this time of economic downturn with Walt Disney World seemingly, battening down the hatches for a slow down in business by cutting back on some of its live entertainment groups (as I detailed in a previous post
Post a Disney picture a day), it is nice to hear that some folks from the Adventurers Club and Comedy Warehouse may have other jobs on property, I recently leaned that Carol, a talented keyboardist who worked at the Comedy Warehouse, got a job at Rose & Crown Pub, while I was quite pleased to hear this my next thought was, "Does that mean that Pam Brodie has went into full retirement? (she works two days a week in a sort of semi-retirement position), or are they getting rid of Leon Gregory?", it then occurred to me that perhaps there was another option too perhaps they would add some earlier sets, I then I realized in the current economic climate that was quite unlikely, and when I got the opportunity to chat with some other fans asked if any of them had heard what the story was, unfortunately it turns out they are getting rid of Leon, in fact his last day has come and gone. Unfortunately times of unemployment seem to be an unavoidable fact of life for most musicians. You know, when you think about it Walt Disney World allows an almost unheard of opportunity for musicians to have regular work without having to travel. I'll miss Leon and hope he lands on his feet, and with his talent and experience, think that he may have a better chace at that than most folks would in his situation, with some luck I may get to hear him play again someday. As for Carol I only caught her once, as for me I only made my first trip to the comedy warehouse for the first time last December (and decided I needed to visit it more on future trips, oh well, so much for that!) even from that brief exposure it was clear she is one talented individual. So the next time I'm at the pub in the Great Brittan Pavilion I'll enjoy Carol (or Pam Brodie if it is one of her days) but I'll pause and think of Leon Gregory in a silent toast to him. 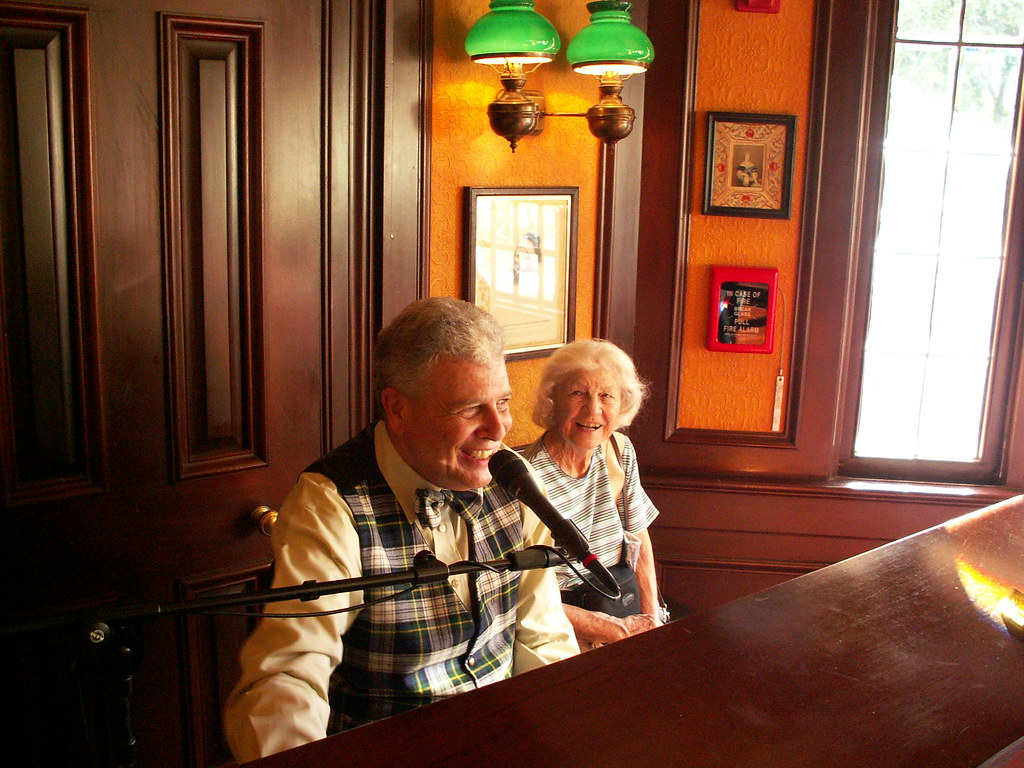 Now with that announcement about Leon being gone I felt the need to share the audio of him NOW which led to the second episdoe of the week (but first of the month!)

If you want to download the show manually (instead of using a podcast aggregater such as Itunes) then follow this... Link to the shows libsyn page OR right-click on this link: http://media.libsyn.com/media/bbdp/bbdp42.mp3 and choose SAVE TARGET AS to save the file to your hard drive.