Things change, as much as we sometimes think we would like it things won't stay the same forever, changes come, and as a fan of WDW entertainment groups, it might seem right now like all the news lately was bad with a large number of things going away: BUT! we have not yet heard yet what NEW ENTERTAINMENT is being put into the parks, and even when we do find out what they are it may take a few trips of EXPERIENCING these new entertainments to make up our minds how we feel about them, I have an example in mind that makes me think this is true.

In 2000 there were at least two HUGE changes in WDW live entertainment;

and, that second one had greater fallout two, as for part of the day the WDW marching band used to break up into smaller sub groups like;
As you can see the number of folks in those bands adds up to 19, and looking at he old pictures I see of that band it looks like that is about how many there were. At the time the marching band went away some folks bemoaned the loss of the band, but soon we learned that there was another story here, and that is the new entertainment that was coming

from an old Disney press release that I found a quote from on Intercot:
http://www.intercot.com/news/2000/august.asp

The new groups include The Main Street Philharmonic, a 12-piece brass and percussion ensemble playing in Town Square, The Tomorrowland Blast belting out rock 'n' roll tunes, The Fantasyland Woodwind Society, a quartet of saxophonists playing Disney favorites, and The Notorious Banjo Brothers...and Bob, two banjo players and a tuba player, who entertain guests in Frontierland with a comical twist.

Now there are a few things in that press release that I need to elaborate on, the Fantasyland Woodwind Society was the original name for the group that is now know as either Cinderella's Royal Saxaphonists or the Toontown Tuners depending on which costumes they are wearing when you see them, The Tomorrowland Blast was a bit like a pared down version of the Future Corps, and it later changed its name to the Tomorrowland Countdown and I believe was not discontinued until 2006 or 2007.

Now if you look at just the case of the Magic Kingdom by itself you can see that this was not in the end a cutback, after all before you had a marching band for part of the day, and three smaller bands for part of the day, all using the same 19 member cast, but with the line-up that started in 2000 you have a 12 piece band all day long, plus a five piece sax quartet all day long, plus a three man band in Frontierland all day long, which actually adds up to 20 pieces right there, that said early on I was not a big fan of the Philharmonic, not because of the musicians in it or anything like that, but because the material they were performing was very limited, and focused on a sort of comedy that was ok, but didn't seem to have a lot or value for repeat viewing for me, for a long time it seemed like every time I saw them they were doing the little "take me out to the ballgame" set where there was sort of an organized chaos, of a very disorganized band heading up main Street, and then marching back, still more focused on interacting with the audience than performing songs, and there were only just 2 or 3 songs I ever heard them do for several years, then a few years ago I began to hear that they were sometimes performing other sets, since then I've made a point of taking them in a little bit more often, and yes they do more songs now, but it seems very tightly scripted, and the show has not changed much in the past few years other than the fact that there is a different set they do for the Christmas season, I still have a lot of hope for them because although I miss having a band like the old "traditional marching band" the newer version of it does more "modern" arrangements that, ironically enough, remind me a bit of the STYLE of the other band that disappeared in 2000 Epcot's Future Corps, I like that style and think they execute their songs VERY WELL, still, I would still like to hear them do a little rotate a few different songs into the act each year (perhaps my timing has just been bad?), but overall, I still like what they are doing. 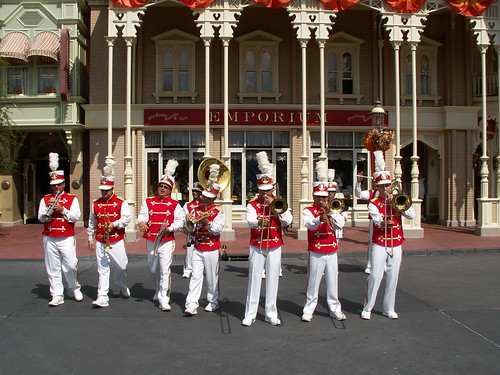 One of the other bands from this crop that came in 2000 score very high with me and many others in part BECAUSE they have a fairly wide repertoire, and that is the Notorious Banjo Brothers and Bob, they too use humor in their act, and make a point of interacting with guests so I see them as a sort of "best of both worlds" 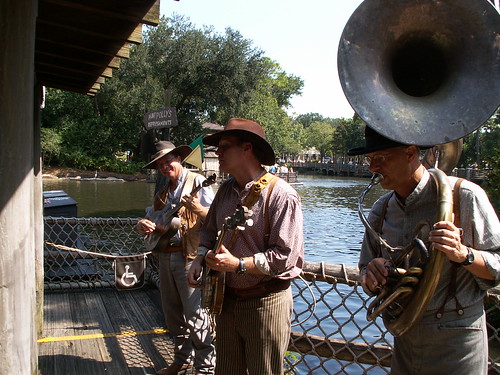 the Sax quartet (occasionally they perform as a quintet too) weather you call them the Tuners, Royal Saxophonists, or Woodwind Society, seem like a pretty versatile act to me too, though I'd like to see them a bit more to see just how versatile they are. 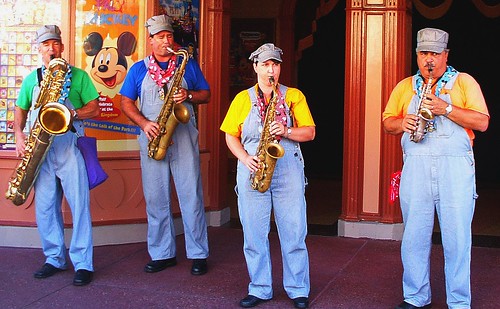 The cutting of the Future Corps to me just seems to be a bit of a different case, it seemed that perhaps somewhere along the line it was just decided that the focus on live entertainment in Epcot should be more in the World Showcase, and in recent years it seems as if perhaps Future World perhaps it may be felt that almost no live entertainment is needed in Future World, there used to be MANY more acts in Future World, many have come and gone:
and it seems that at that same time the Magic Kingdom decided it would be a good idea to start a similar band of it's own, the Tomorrowland Blast, which may have given some of those former Future Corps members an opportunity to move over to the Magic Kingdom, all these years later I still miss the Future Corps.


I guess that as fans, we're not going to necessarily agree with every move that the Walt Disney Company makes, but, although I may miss American Vybe, the Future Corps or Spelmanns Gledge, I look forward to what NEW things may arise, there may be a future favorite beginning soon that I will come to know and love. 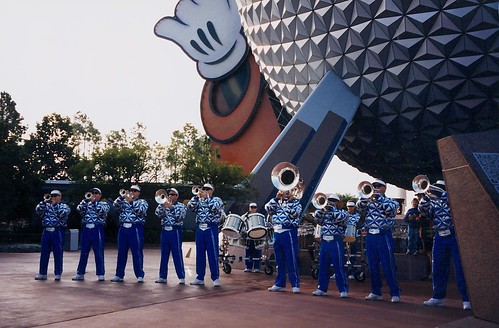 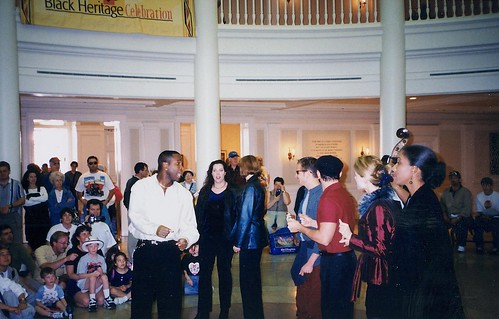 The pictures of the old version of the WDW Marching Band near the top of the page are from my Sept. 98 trip report:
http://www.bigbrian-nc.com/1998/sept/003.htm

Steve Soares site was invaluable in helping me learn about the way the Magic Kingdom Band used to be organized.