...after all the name of the boats in this fleet are the Friendships, all bearing names with a Roman Numeral following them from Friendship I to Friendship VIII. Despite having almost identical names design and function they have a few Individual characteristics to tell them apart, first off the easiest way to tell them apart is the obvious one, if you are looking at the stern of the ships there is a huge nameplate with the name of the individual ship, also there is a much smaller inscription of the ships name on the "front hood" just below the base of the Windshield, but if you really want to be the ultimate Disney geek you can tell them apart even from a distance and from the side ...how you may ask? well they each have their own Paint Scheme, all following the same pattern, but with a different set of colors for each ship the main body of all of the Friendships is white, they then have an accent color for the roof stripes, and a second accent color for the trim around the windows (this color also continues as stripes across the "front hood" of the ship), these two colors are then repeated as a pair of stripes around the boat, the upper wider stripe matches the roof color and the lower "pinstripe" matches the window trim. . Over the past few years I’ve taken a lot of photos of these ships and I’ve used these photos to make a list of these ships that identifies them each by their color scheme, it first appeared in my Mousefest 2006 trip report, a copy of that chart is further down the page. One thing that original chart does not take into account though is that the Friendships were only painted into these newer paint schemes in the mid 1990’s; before that instead of having the striped roofs that the friendships have today they had solid colored roofs, recently I got in contact with Greg Chin a former watercraft cast member who has a great web site about WDWs watercraft.

He was a cast member at the time most of the Friendships were being built and he shared with me some of his memories about them in some emails we exchanged, he also has a couple of pages about them on his site:

and, you can see some construction photos of them on this part of his site:

Excerpts from an expert

Below are some excerpts from some emails I exchanged with Greg that shed a lot of light onto many of these subjects for me. Here's a photo of me , and Chris Mohler, (Note from Brian, Gregs photo is above, Chris is not pictured here) taken on Friendship III (the Red one), when it was brand new, in late 1982.

We had just docked, and shut down 2 motor launches.

I saw that Friendship III was there. The new interior and helm console looked wonderful. And I noticed: there was no front AC column duct-work to block the forward view of the bow windows. They got it right, this time.

The watertaxi had recently been lowered into the water, during the noon hours. Since Chris and I were part of the 14 test-pilot crew, I wanted to get some photos of this one, before it was moved over to EPCOT.

I took photos with my 35mm Nikon FM camera, on the watertaxi, as it was docked, in Drydock. Chris and I snapped the photos, of each other, next to the helm console.

This watertaxi was never used in and the Seven Seas Lagoon, for hauling passengers. After the trial runs were done quickly, it was taken out of the water again, placed on a large flatbed trailer, and taken over to the Epcot Drydock area, at night.

It was the only time I could have taken these historic photos of us, on the brand-new watertaxi. Friendship III was needed right away, over at the WSC Lagoon.

I should say that it was wonderful to see the first 2 watertaxis being built, in the Facilities - area of the WDW Central Shops, during 1980 to 1981. Knowing that we, 14 test pilots would soon be getting the 2 boats, to do the trial runs, on and the Seven Seas Lagoon. That gave us a year to test everything and see how they performed.

I would go over to visit the , in the Central Shops, and see how the construction was coming along. They built two watertaxis, at a time, with them arranged stern-to-stern.

The has a large gantry crane overhead (on guide rails), since the crane was used to pick up the watertaxis, and put them on a flatbed trailer, and then moved over to Drydock, where the boats were painted. Then, their interiors were finished-out with their engines, generators, seating, and equipment.

The Drydock Mechanics are the qualified experts to install all the marine-gear equipment, so they get to do it. They also got to spray paint the watertaxis, using the very best catalyzed - poly-urethane acrylic enamel paint. It's tough spray paint!

I'll tell you, the watertaxis look totally different, once they are spray-painted in their white coat, and color schemes. Being made of 98% aluminum plating, they didn't require any primer coat, at all. The bottom hull is spray painted black. The boats rest on specially-made yellow jackstands, while they are out of the water, in the Drydock Bldg. area.

The watertaxi seats and interior beige paneling is made of vacuum-formed Kydex plastic sheeting. It's a tough industrial-strength, vacuum-formed, and thermal-setting plastic.
Once it's heated, and vacuum-formed, it sets, and cannot be re-heated or re-shaped again.
It's the same Kydex plastic that's used in the and Land pavilion boat rides.
I saw the vacuum-forming being done, during the Watertaxi construction. Also, for the interiors of Monorails Lime and Coral, in 1981.
All the beige interior pieces were then trimmed, and stacked on wooden pallets.
The blue seats were being molded and assembled for the watertaxis.
Green seats are used for the boat attraction seats. It has a nice textured finish on it.

Connecting the EPCOT Resorts to the WSC Lagoon:

For about 2 years, the half-completed hull of the 5th Watertaxi, sat back in WDW's Drydock area, wrapped-up with thick clear plastic coverings, to keep out the rain water. That was during the 1987 slow-down, and the need for them. For a while, the Omnibuses around the Lagoon, and the 4 watertaxis filled the immediate needs for guest transportation. Michael Eisner and Tishman Construction were deciding about the Swan and Dolphin Hotel Resort's ultimate design and location.
Once the decision to connect the EPCOT Resorts' "Half Moon Lagoon", to the WSC Lagoon was made (big changes on the WDW map), they went ahead and completed the 5th and 6th watertaxis. And planned on th 7th and 8th watertaxis, as well. Thanks to the EPCOT theme park, and the EPCOT Resorts, Walt Disney World's watercraft fleet doubled in size,

As you can see from the chart above there are two color schemes not accounted for (and one with a discrepancy but more about that in a minute), In the photo below you can see the ship has a solid roof color but, UNLIKE the earlier Freindships that color DOES NOT continue down around the windows, in fact if the roof was striped Teal instead of solid it could pass for Friendship VI. Greg also pointed out several small details that help distinguish the Friendships from each other than the paint schemes, in the photos in the first half of this article, look at the frames around the windows of Friendship I and II, you’ll see they are a silvery aluminum color, but on all of the later Friendships they have “black anodized aluminum window frames” though nowadays even I and II have changed over to that style also.

Later Changes
Another difference with I and II is that originally the ductwork for the A/C on
these two ships was more obtrusive, but in the later ships the ductwork was ran under the deck, I’m
not sure but I think I recall hearing that had changed on I and II, though if it has I don’t know
weather to think it happened in the mid 1990’s refurbishments that included the re-painting or when
the new A/C systems were installed on the roofs of the Friendships around 2004, that change led to
another thought not right away, in photos I took of the Friendships in late 2004, and late 2005 the
new A/C units were easily visible on the roofs of the ships (well in the 2004 photos it was on just
some of the ships), but by the time I returned in 2006 a new flange had been added around the perimeter
of the roof that is more aesthetically pleasing to view than the asymmetrically laid out A/C units.

Friendship I - 2000
It looks as if that duct work may still be blocking the view for guests in this year 2000 view, but look at he clean lines on the roof of the ship before scrolling down to the later photos. 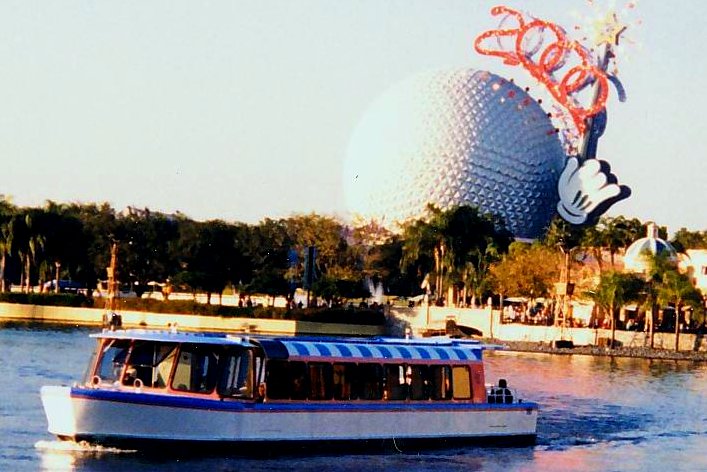 Friendship I – 2006
With the new flange around the roof perimeter, note also the curved windows on the front corners 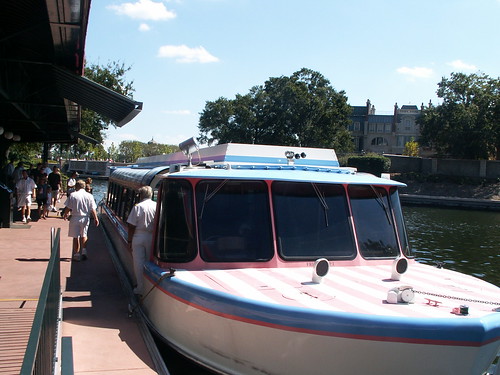 One final difference that Greg clued me into after he looked at some of my photos...
Also, on Watertaxis I thru V have a one-piece curved-plexiglass window, right next to the helm console.
Apparently Watertaxis VI, Vii, and VIII have an extra vertical window mullion in the same place, to eliminate the need to get specially molded/curved plexiglass window panes for that corner window.

Below is a photo of Friendship VII that shows the later type of window, compare this to the windows on Friendship I in the image above the chart, that one illustrates the earlier type pretty well.

Before closing this out I want to thank Greg for his generous amounts of time he took in writing replys to me as well as the hours he has already poured into his wonderful site, Thanks Greg!

and for anyone out there who can fill in a few more of the blanks as to the original color schemes for Friendships VI VII and VIII, or other details we have not touched on here,  please feel free to email me martsolf@mindspring.com