Back to the world of blogging after a long hiatus! in fact a lot of my typical internet/mousing it up activities slowed down quite a bit in January, now I'm getting caught back up and the urge to blog has returned, in part because I've been starting to podcast more, but not on the "Mousin it up!"/bbdp feed. I took Tom Corless up on his offer to let me host the "Your Ear to the World" podcast, and have actually put out an episode a week for going on four weeks, and part of the inspiration for this post came from the latest episode Your Ear To the World 26 - Captain Lisa and the Jazz Lady. 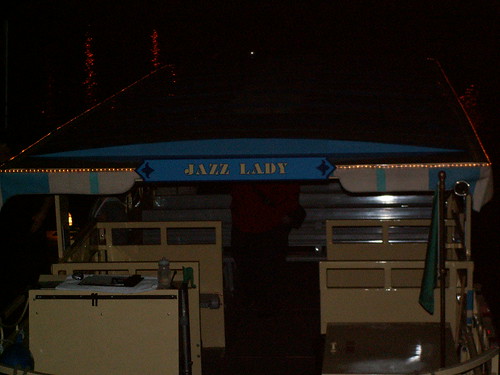 The desire to take a trip on the Sassagoula had been growing for some time as over the years I've covered many of the other "fleets" in WDW's navy on the WDW: A History in Postcards section of the site as well as in this blog.  Disney's watercraft is a subject that has brought be more feedback than almost any other facet of the resorts history that I have covered. During Mousefest, I was happy to have the opportunity to take a cruise on the Sassagoula after attending a party some friends had held in thier unit at Old Key West, and while heading to Downtown Disney to catch Nova Era a group that many moons ago used to play in the Italy pavilion of Epcots World Showcase. 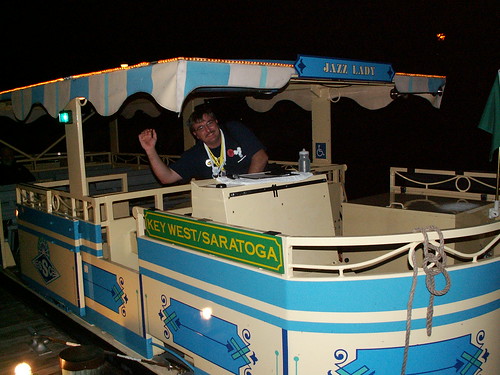 I suspected that with it already being dark I might not learn all that much about the ships or get many good photos, but luck was on my side. As I walked up to the dock and took a few pictures of the ship that awaited, The Jazz Lady, my skipper for the trip approached and both offered to take my photo and struck up a conversation with me, what was even better was the fact that she seemed to have quite an appreciation for WDW herself, and tried to be as helpful as possible in trying to help me get all the names of the ships of the Sassagoula Steamboat company. 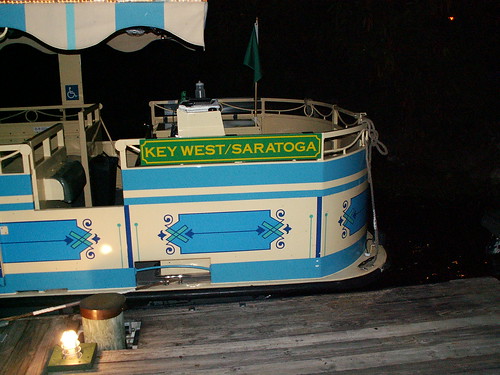 Now despite the fact that she had trouble remembering the names,by the end of the cruise she had come up with 14 of them, which is the same as the number of units in the fleet, she also passed on to me some other details below, now since she was a little unsure of some of the names this list is no "sure thing" but it's certainly more than I've seen anywhere else, the best I had seen before was a short list on the portorleans.org web site and I think it is possible that was a sort of attempt to capture what types of names the ships had, that might have been more to give the feel, than an actual recounting of exact proper names,  still I've given the list of which names are on his list that were not in Captain Lisas below.


These photos are the visual accompaniment to the podcast Your Ear To The World Episode 26.
http://eartotheworld.net/podpress_trac/web/249/0/ettw-26.mp3

Captain Lisa remembered 14 names,
Although I've assigned the list here a numerical order, I don't know what the actual order of launch was for all these vessels.

Names in bold are the ones I found on www.portorleans.org/ferryboats.htm that don't match one's mentioned by Captain Lisa

UPDATE: A reply by Andre of the Port Orleans web site (in the comments below), let me know that these are all actual names read from nameplates of the various barges. So the task now is to figure out which of the names on Captain Lisa's list were wrong the first obvious possibility is Sassagoula Steamboat, she may have been reading something of a piece of paper looking for names and I mistakenly assumed it WAS a name. Next candidate Bayou Queen , immediately after she said that name she said Bayou Princess, so perhaps she was correcting herself. Next up I'm wondering if either of the two ships with "Florida" in the name was a "correction" of one previously given incorrectly as well, same goes for the two "Memphis" ships.  I would imagine that the Saratoga Queen that Andre mentions is one of the newer ships in the fleet being that Saratoga Springs has not been open all that long.

The DVC lines tend to get the newer ships like the one I rode, the Jazz lady.

I've heard that with the addition of the Treehouse villas to Saratoga Springs there will be an additional dock added. There should be one more name on this list if they purchased the next vessel in the fleet that they were planning on, that gets mentioned in the audio. 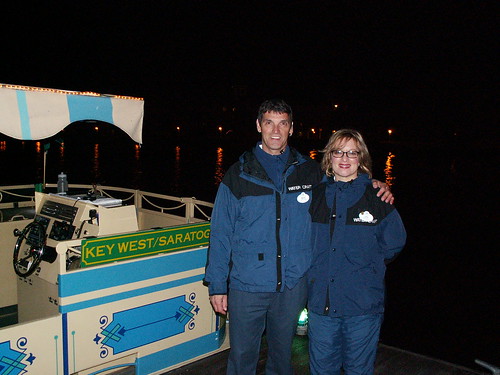 I'd love to hear about any corrections to this list, and other bits of history for this fleet,

were all of these ships purchased just for this fleet, or were any of the earliest ships transferred here from elsewhere on property?

Are these fourteen the only ships that ever sailed this route, or are their some "retired" ships?

Have any of these ships be re-christened? if so what was their name previously?

How has the fleet size changed over the years, and at what poits did thay add "ports" for instance was Old Key west addded immmediatly when it was built, if so how many ships were added at that time? Did the old Disney village get service by these ships?