Recently one of the podcasts I listen too (I think it may have been Inside the Magic) mentioned that the Cruiser "Mermaid I"
pictured below, is out of service for the next few months for repairs, and that folks might possibly experience longer waits for the runs cruisers and
launches make to Fort Wilderness, but it occurs to me that since they also brought over some of the former Animal Kingdom boats to
Bay Lake/seven seas lagoon for fireworks cruises, it seems to me that at least when they are not being used for that those vessels could be
used to aid the other ships on that run. It might also give folks a better chance to get good photos of them, which I would really like to see.
As I mentioned in a previous article http://bigbrian-nc.livejournal.com/9169.html
the few ships were brought over from Disney's Animal Kingdom were re-chrstiened with new names,
ones that make more sense for use on the
Seven Seas Lagoon and that also make a nostalgic nod to a few vessels from the past. Of course these ships have thier downside, they are open to
the weather and that might make them hesitant to use them, but once again, even if they can only use them PART of the time that would
at least allow them a bit more chance to keep the other Cruisers and launches well maintained 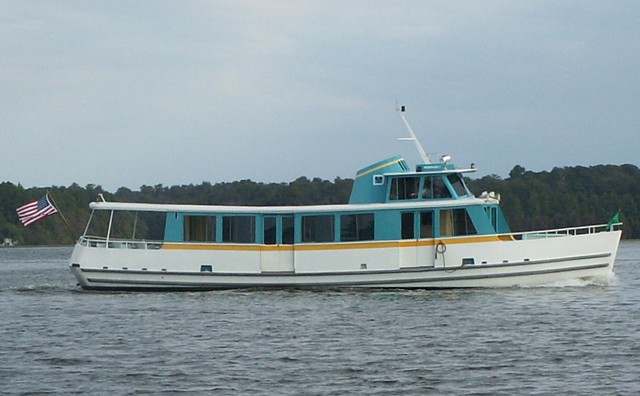 This sort of moving boats from one route to another has been done before, as I was reminded just today by George Taylor of the imaginerding
blog http://www.imaginerding.com/ He sent me a link on my Facebook page, my reply got so long I decided it worked better as a blog post, and here we are!

Brian, check out the boat at 9:25 in this video. It is on the World Showcase Lagoon.
Reminds me of the launches that go from the Poly to the MK.

Very cool George that is one of the Motor launches, and I can ALMOST tell you which one, as it first comes into view you can see a green reflector
on the side of the ship on top of the canopy, the reflector is Green because it is on the right or Starboard side of the vessel, anyhow in the center
of the reflector is a letter, since the launch has a blue hull it would have to be the Mariner, Seafarer, or Voyager (as the Adventurer, Explorer, and
Navigator have white hulls) the letter on the reflector is quite square edged so it is certainly not the "s" of the seafarer I THINK it's the Mariner,
but the letter is blurry enough that I can not be certain that it not the Voyager. Today there are 8 friendships and they were built over time,
back then the Seven Seas Lagoon had excess capacity, there were fewer resorts (no Grand Floridian or Wilderness lodge) and more
ships (the two side-wheelers) than there are today so it was not so bad to pull one of the launches for this duty.
Now with two more resorts and two fewer big ships and 8 vessels on the World Shocase lagooon/ Crescent Lake.
It would almost make more sense to do it in reverse.

Also, I have one more thought, if they decided to perhaps bring over the remaining Animal Kingdom Vessels it would be really cool if
they renamed them for the old Side-wheelers, those ships were named the Southern Seas and the Ports-O-Call, but the pre opening art card of one of these vessels
showed one named the Osceola and I think that would make a great name with a tie to the past for one of these ships
Collapse