Just recently Werner Weiss, curator of
the Yesterland web site, began adding
entries for Walt Disney Worlds bygone attractions to his we site. His site has
long been my favorite of all Disney web sites that I told him
when I finally got the chance to meet him on the occasion of Epcots 25th
anniversary "you're the reason I bought a computer!". While it's true that
by the time I bought a computer there were actually many web sites that I
had begun to enjoy via our fantastic public library system we enjoy
here in Charlotte NC, his was already my favorite, and over the years though
his updates have went through some periods of less frequent updating,
I've always enjoyed checking in occasionally to see what is new. In fact,
when I saw he had come into a time of being more active recently and was
beginning to add WDW attractions
I was quite excited about the prospect, as it brings the
possibility that I may be able to contribute material (photos especially)
to the WDW Yesterland entries, as I have photos of at least some
extinct WDW attractions. I even put up a little
post in
his section of the forums over at micechat listing at least some of the
"extinct" WDW attractions that came to mind that I have photos of. That said
it may be some time before he ever gets to many of these attractions,
so one of the uses of this blog that seems entirely appropriate to me is
to highlight groupings of photos that focus on some aspect of WDW that has
changed over the years, if Werner ever does an article on these I'd be
pleased as punch if he would like to use any of these photos. My first
entry in this field is going to be on an aspect of WDW that is so minor
it likely might not ever be covered as it's not really an attraction as
such, but in a sense that's all the more reason I should bring it up here,
to "give it its due" so to speak.

I would imagine that anyone who is reading this is quite familiar with the
Mickey in flowers that sits in front of the Main Street Train station at
WDW's Magic Kingdom...

...but did you also know that there used to be a similar Mickey
at the Disney-MGM studios? Now this wasn't exactly a Mickey in flowers though,
this Mickey was formed through the use of box hedges, so in a sense this is
a sort of "topiary Mickey"... 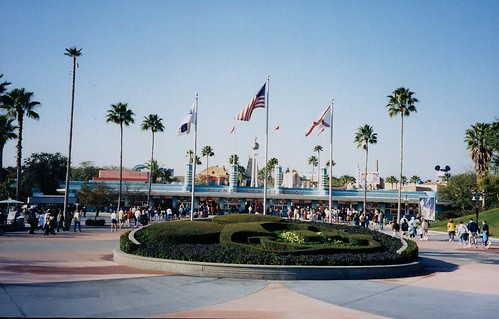 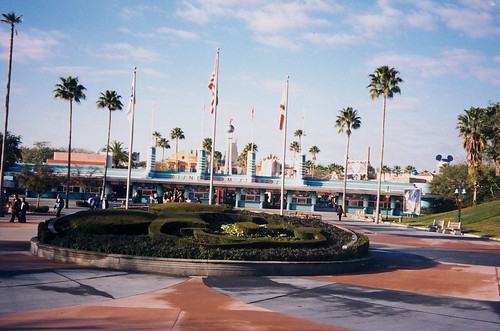 For those of you who are familiar with the entrance to the studios, you may,
upon seeing these two pictures already realize that very few folks entering
the park actually SAW this Mickey, if not you might wonder Why is that"? well,
you see, folks entering the park from the trams or on foot from the parking
lot would have came in from the left behind where the topiary is in this view,
and folks coming from the
Friendship docks would have come in from the left. for a little more
location reference, behind me when I took
this shot is the arm of Crescent Lake that comes right up to the
entrance of the studios, and where I'm standing is actually a semi circular
concrete deck that juts out into the lake just a bit...

... in fact to get a good
angle for this photo I suspect that I MAY have even stood on the benches
that are at the back of that deck (along the railing next to the lake), you see
the Ground in the planter is not sloped all that steeply and to get a good
vantage point to photograph this "profile Mickey" was a little bit difficult.
So in the end it's not all that difficult to guess that it may have been
decided by the horticulture / landscaping department that their topiary
dollars might be better spent elsewhere at the studios, in a location
where more guests could see their handiwork. Here's a shot
of this location today, well not literally today but in June 2007 so
back when it was still called the Disney-MGM Studios.

Still there is something else in that same picture of the now empty planter
that gives a clue as to why I'm not too upset about this
particular topiaries disappearance, look off in the upper right hand
corner of that photo and you'll see a familiar form on the berm that is
just to the right of the bag check area, although not a side profile like the
Mickey that is now gone there is a group of tri-circle or "classic Mickey"
forms, but we can get a better view of them than that... 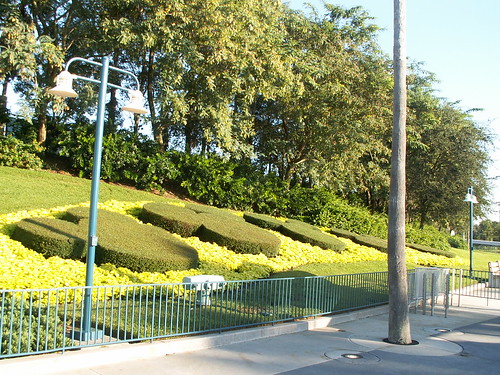 ...and if you're still a little fuzzy as to where these Mickey forms are,
then heres
a shot looking back from the ticket booths... 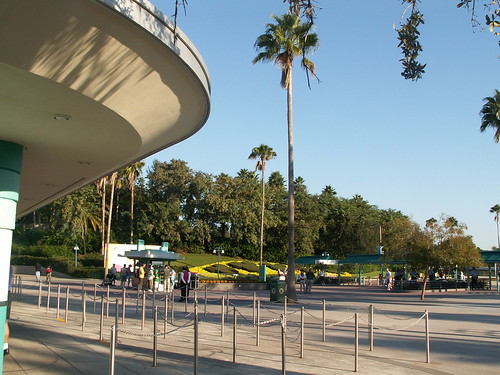 ...So, in my opinion, although the side view topiary that is gone,
is a neat piece of the history of
the Disney Hollywood Studios, the topiary box hedge Classic Mickey forms that
have replaced it are an apt successor and in many ways better
since so many more guests get to see these.