As someone who likes to view lots of the live entertainment available on property, I have long been aware that it is sometimes useful to have a way to differentiate between members in a group, it used to be that live entertainment performers wore cast members just like any other cast, but that went away several years ago, due to some security concern (stalker type situations), still in most cases the folks in these groups readily share their names, so when I say that I saw the Dapper Dans perform I might be able to say I saw Kevin, Chad, Ken, and Neel, and other fans of the group would know just which line-up I saw. But with performers that have character names there is sometimes an additional level of complexity, not so much at the Magic Kingdom because, in that park (AFAIK), there is only one person who plays the mayor, one who plays the Fire Chief, each of the ladies of the Main Street Womens Auxilliary has a character with their own name and back story, and so forth but for the Adventurers Club it is not so easy, in the case of the AC, most of the main characters "have to" appear every night, is some cases they have allowed some substitutions (Madame Zarkoff can replace Samantha Sterling) but usually any replacements are simply different cast members playing the same roles, since these cast need to stay "in character" while on stage asking them their real names would be fruitless, as well as a bit rude, and COULD seem a bit "stalkerish", so instead the fans who follow this club have developed a wiki that ties nicknames for each of the actors to photos of the cast member in that role.

and the page that lists cast by nickname:

I used the photos on those pages to add the nicknames (as searchable tags) to the few pictures I have of the AC up on flickr: 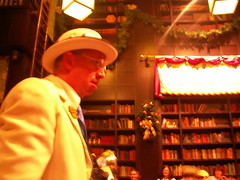 this one of "snoopy" as Hathaway: 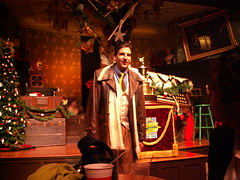 and this one of "Mailman" as Emil: 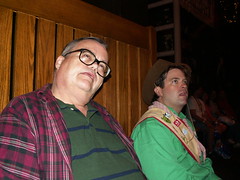