In the previous posts in this series I've shown you a few look alike structures, this post is still about a sort of a look alike, but it's not a structure, and it is certainly NOT a dead ringer for the version of this found in the Disney parks. In fact in the case of this post you might say it's all in my head, because it is just something I associate with the Disney parks and that is Topiary. Growing up near Disneyland I always associated Topiary with the It's a Small World attraction as that is where most if not all of the Disneyland resorts topiary was when I was a child in the 1970's.

Nowadays my resort to visit is normally Walt Disney World where the topiary is a bit more widely distributed, and on a personal note I much prefer the older style topiary, the sort of box hedge trained to grow just so, rather than the newer "ivy on a form" technique, some of those can be cute, but it still seems somehow just not as good on some level.

In fact although topiary can be found in the world outside the Disney parks I myself have only run across this type of thing very rarely, and most of those had probably been at hotels near Disneyland (seen as we passed in our car) where they were obviously trying to give their hotels a bit more of a fun "Disney" feel.

In 2001 I met Carlene, and we married in 2002, at the time her mom was till with us and we spent many weekends at the house Carlene's dad built just outside Marion North Carolina, right near the Pisgah National Forest, when we first started going up there whenever i went to run an errand I go into the town of Marion, at some point I realized that the town of Old Fort was just as close, and although it is MUCH smaller than Marion, it's Mc Donald's was just as close as the one in Marion, and the Hardees in Old Fort is much closer to her parents place than the one in Marion, so Old Fort became the preferred direction for a breakfast trip.
On one of my breakfast runs as I approached Old Fort something on the right hand side of the road caught my eye, on the way back breakfast in hand I got a closer look, at TOPIARY! I told myself "I need to remember to bring my camera next trip" it was actually a few trips later (and it was probably 2003 by this time too) when I finally got to take some photos of these, since I was using a film camera I didn't go nuts but I still managed to get a few good shots of what I saw.

This first shot is just to put the view from the road into perspective (though at least two of the topiary are visible here): 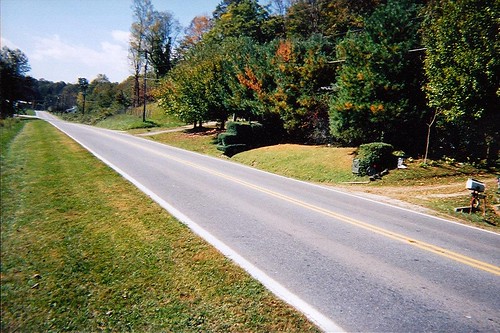 I wonder if the person who grew these is a truck driver? 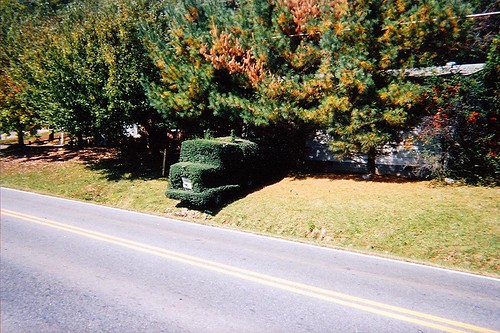 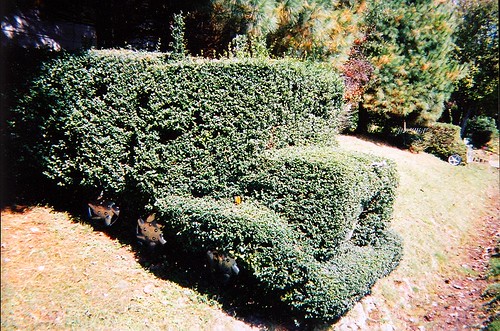 This one looks like it took a bit of a beating, but it looks pretty good just driving by: 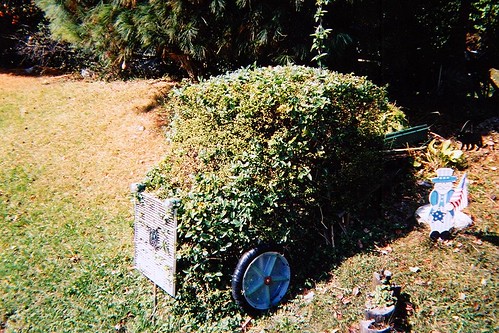 These last two were a bit further back, but I think I stayed close to the road and just used my zoom, my cannon sure shot did have a pretty decent zoom on it, but even if i had needed to step in closer I might have been tempted to because for years my mom used to drive a jeep that looked a lot like the profile of this topiary, as a part of her job with the United States Postal Service, we all remember those old postal jeeps right? Well at least those of us over a certain age do. 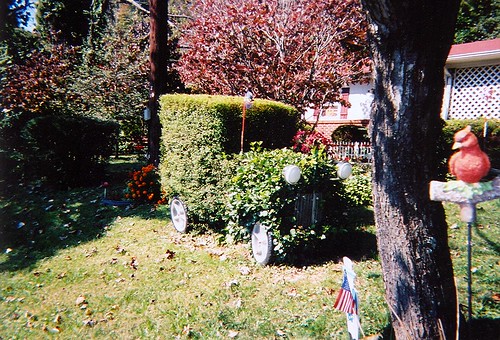 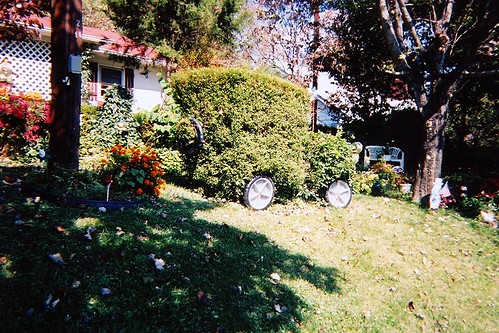 If you happen to be in that part of NC here's a map that will get you pretty close to this stretch of US 70, the intersection at the star is not an exact match for this house, but it's probably within a mile or less (less I'm guessing).


By the way Alan Huffman has been talking about a similar topic on some of his recent episodes of the park Hopping podcast he calls them Dis-sensory experiences, things you hear or smell outside the parks (or in my case SEE), that remind you of things IN the parks.